‘My leader is Ganesh Kumar, I will vote for him no matter which party he belongs to’ : Anusree

Most people say that their favourite leader is either Narendra Modi or Rahul Gandhi or any of the prominent national leaders. However, actress Anusree is a bit different from them. Anusree says that her leader is not Modi or Rahul but Pathanapuram MLA Ganesh Kumar.

‘He has done good things for our native place as long as I can remember. We will vote for Ganesh Kumar no matter which political party he belongs to’ – clarified Anusree.

Earlier there were allegations that Anusree was a member of Sangh Parivar when she appeard as ‘Bharathamba’ as part of Sreekrishna Jayanthi celebrations. She was also branded as communist when she recited the poem ‘Saghavu’. 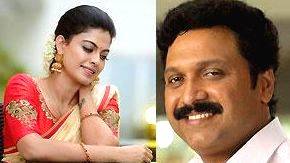 cine-news It’s the time of Corona, if actors don’t appear before people they will think that they are dead; Ganesh Kumar fires a short in Parvathy’s arm
Ganesh Kumar has criticized Parvathy in discreet for resigning from the actor’s organisation AMMA, condemning

general We can’t blame UDF for wanting us to be back…it’s like some yearning for a beautiful girl when they see her: K Balakrishna Pillai
KOLLAM: Kerala Congress (B) Chairman R Balakrishna Pillai and K B Ganesh Kumar MLA have

cine-news "Like a flower in a pond": Anusree charms with her new photoshoot
Actress Anusree was active on social media during the nationwide lockdown due to coronavirus pandemic.

general Ganesh Kumar takes rash JCB driver to task in cinema style (video)
VENKOLLA: K B Ganesh Kumar made a timely intervention to avoid a mishap that could

general I was ousted from UDF for talking about Palarivattom corruption: Ganesh Kumar makes shocking revelation
THIRUVANANTHAPURAM: K B Ganesh Kumar MLA has come out with a startling revelation that he
TAGS: GANESH KUMAR, ANUSREE
SPONSORED AD