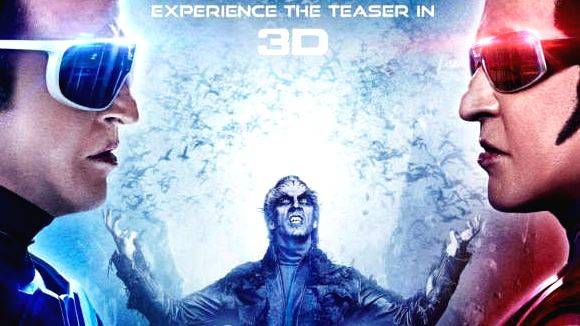 NEW DELHI: The makers of highly-anticipated sci-fi film '2.0' just dropped its Hindi teaser and it witnesses a showdown between Rajinikanth and Akshay Kumar.
The incredible teaser sees Akshay as a mysterious supervillain, who has the superpower to control crows and mobile phones. He takes over the world with this ability. When the world is in a desperate need of a superhero, scientists and researchers bring back Chitti, the robot.
Taking to Twitter, the 'Gold' star wrote, "On the auspicious occasion of #GaneshChaturthi, doing Shree Ganesh of India's Grandest Film: #2Point0 ! Here's a glimpse of the biggest rivalry, Good or Evil...Who decides?"

Directed by S. Shankar, the film also stars Amy Jackson, who plays a droid.
'2.0', which brings Rajinikanth, Akshay Kumar, and Director Shankar together for the first time, is a sequel of 2010 film 'Enthiran' (released in Hindi as 'Robot').
The flick will hit the silver screens on November 29 this year.

cine-news Complaint filed against Akshay Kumar accusing him of hurting Marathi culture in ad film
AURANGABAD: A written complaint has been given by two-person in Worli police station against actor

general Akshay Kumar’s latest post with daughter goes viral
During a recent trip, actor Akshay Kumar was out with his daughter on a morning

cine-news ‘Ajit Doval’ on Sliver screen; Akshay Kumar in and as Super Spy
A number of biopics have come out including that of Prime Minister Narendra Modi. Now,