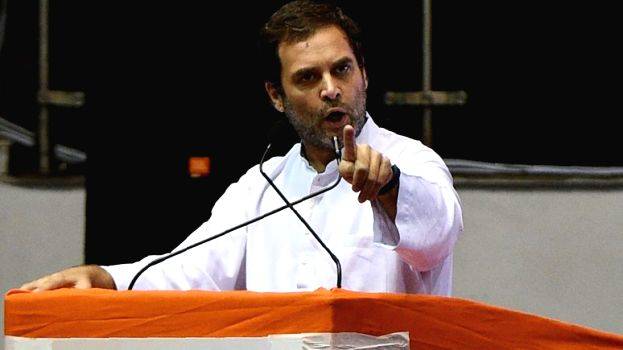 NEW DELHI: Stepping up his attack on Arun Jaitley for allegedly meeting Vijay Mallya before he fled to the UK, Congress president Rahul Gandhi today accused the finance minister of colluding with a “criminal” and not informing the probe agencies, despite having information about the liquor baron’s plan to leave the country.

Speaking at a press conference, Gandhi also trained his guns on Prime Minister Narendra Modi, asking, “Why did Jaitley allow Mallya to escape, or was it an order from the prime minister?” “This is a clear-cut case of collusion. There is some deal between them. Finance Minister Jaitley must resign and this should be investigated,” he said.

Senior Congress leader P L Punia said on March 1, 2016, when he was in the Central Hall of Parliament, he had seen Jaitley and Mallya talking “discretely”. “On March 3, we heard from the media that he (Mallya) fled the country on March 2. I have clearly stated about this in each of my interview with the media. There are CCTV cameras, we can all see that for proof. If I am wrong, I will resign from politics,” Punia said.

He added that the meeting between Jaitley and Mallya lasted for 15-20 minutes. Gandhi wondered that when the “absconder” had informed the finance minister about leaving the country, why did he not notify it to the Central Bureau of Investigation (CBI) or Enforcement Directorate (ED). The Congress president accused Jaitley and the government of lying on the issue.

general Why each aircraft costs Rs 1670 Crores instead of Rs 526 Crores?: Rahul poses three questions to Centre
NEW DELHI: The Congress on Wednesday welcomed the arrival of Rafale fighter jets in India,

general Obviously, someone is lying: Rahul on PM statement
NEW DELHI: On the day when Narendra Modi landed in Leh and also visited forward

general BJP promotes Make in India, but buys from China: Rahul Gandhi
NEW DELHI: Amid the growing demand to boycott Chinese products in the wake of India-China

general When you will talk on nations defence: Rahul Gandhi
NEW DELHI: Amid the political slugfest over the Chinese transgression, Congress leader Rahul Gandhi on

All arrangements for ‘Bhumi Pujan’, Modi leaves for Ayodhya

Amid border tensions with China, Army chief tells field commanders to be prepared for any 'eventuality'

Eight patients die as fire breaks out in COVID-19 hospital