District panchayat presidents sworn in; UDF clings to power in Wayanad via lots

THIRUVANANTHAPURAM: LDF’s panchayat presidents have sworn in power in 11 out of the 14 district panchayats in the state. UDF got mandate only in three districts. LDF grabbed power in the district panchayats of Thiruvananthapuram, Kollam, Pathanamthitta, Alappuzha, Kottayam, Idukki, Thrissur, Palakkad, Kozhikode, Kannur and Kasargod. UDF clinched to power in Malappuram, Ernakulam and Wayanad. Wayanad where a neck to neck fight was witnessed between both fronts, UDF was chosen to head the panchayat through lottery.

CPM’s Suresh Kumar was elected unanimously to the president post of Thiruvananthapuram district panchayat which was reserved for Scheduled cast. UDF couldn’t field any candidate as it didn’t have any members from the scheduled castes community. LDF’s Sam K Daniel was elected to head Kollam district panchayat. He received 22 out of the 26 votes in the panchayat, whereas his contender UDF’s Brijesh Abraham got only three votes and one vote was nullified.

UDF has won in the polls to panchayat president’s post in Wayanad. Congress’s Namshad Marrakar was elected to the post through lottery. LDF and UDF have won eight seats here.

Muslim League’s M K Rafeeka got elected as Malappuram’s district panchayat president. Vice president will be League’s Ismail Muttedam. Kanathil Jameela got elected as Kozhikode’s district panchayat president. Jameela secured 18 votes and UDF candidate got eight votes. As one UDF member was tested positive for covid, he didn’t attend it. UDF has secured 9 and LDF got 18 out of the total 27 seats. 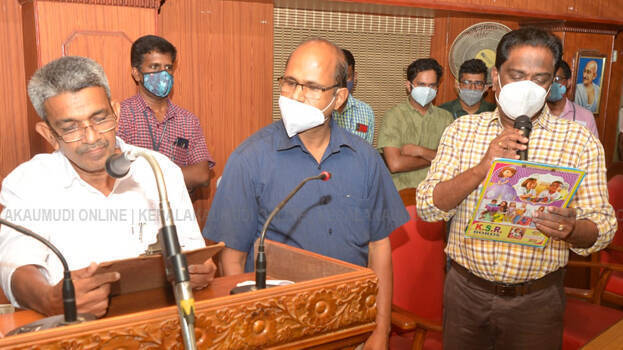 CPM’s PP Divya was elected to head Kannur’s district panchayat. She defeated UDF’s, Lissy Joseph. Divya got 16 out of 23 votes and Lissy got seven votes.

In Kasargod, CPM’s Baby Balakrishnan got elected as president. Her contender league’s Jameela Siddique was defeated by just one vote. Baby received eight and Jameela got seven votes. BJP which had two members abstained from the election. There are 17 members in the district panchayat.

general We had reduced spread of COVID last year, it would be possible again: PM Modi
NEW DELHI: Prime Minister Narendra Modi on Saturday briefed the Chief Ministers of the country

general Two doses of vaccine mandatory for those attending Thrissur Pooram, those who did not get vaccinated should undergo RT-PCR test
THIRUVANANTHAPURAM: With the state reporting a surge in COVID cases, the government has imposed more

general Tamil Nadu has closed 12 bylanes to Thiruvananthapuram; police tightens vigil in borders
THIRUVANANTHAPURAM: With the spike in cases in Kerala following the second wave of the pandemic,

'Do you believe that I am cruel enough to kill Mansoor?'; accused in Mansoor murder case surrenders

'Had recently undergone surgery to remove fat from neck...that is why I announced my resignation through Facebook'; Jaleel requests media not to seek his response

'This might not appear like a big mistake to CPM which appoints wives through backdoor '; K Surendran takes a dig at CPM, govt

‘NSS trying to be tail of RSS’: CPM criticises not only Sukumaran Nair but also Mannath Padmanabhan