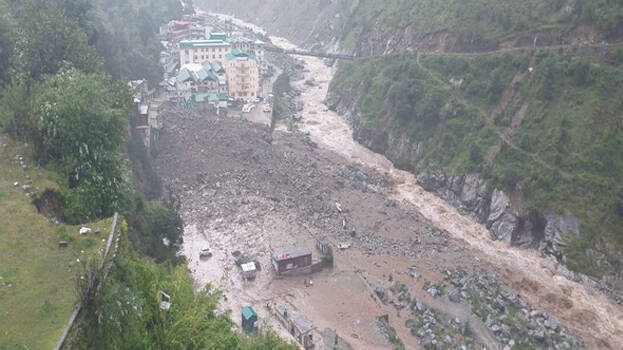 DEHRADUN: Days after the Uttarakhand glacier burst disaster in Chamoli district which left scores dead and more than a hundred missing, local villagers have expressed concerns that the tragedy could have been triggered by a plutonium radioactive device which was lost way back in 1965 during a classified expedition to the Nanda Devi mountain.

A report quoted the people of Rani village in Tapovan area as saying that on Sunday, when flash floods occurred in the area after muck and rubble rolled down from the Nanda Devi mountain into the Rishiganga river following a glacier break, they noticed a pungent smell in the air.

The Times of India quoted a local resident as saying that the smell made it difficult to breathe, at least for some time. The resident added that it is not possible for such a smell to be noticed if only debris and snow had broken loose from the mountain.

"This has triggered concerns in our village that the long-lost radioactive device may be behind the incident," Deveshwari Devi of Jugju village said.

Another resident called on the government to carry out a probe to find out the whereabouts of the device and also analyse whether the glacier burst was caused by it.

In 1965, a joint expedition to the Nanda Devi mountain was carried out by India's Intelligence Bureau (IB) and the United States' Central Intelligence Agency (CIA). The expedition was tasked to install a nuclear-powered surveillance device on the summit of Nanda Devi in order to keep a tab on China's activities.

However, the expedition had to be stopped midway after mountaineers were caught in a blizzard. The team left the equipment at the base of the mountain and returned in order to save lives.

The team went back to the mountain next year but could not trace the equipment, including the special container carrying the nuclear fuel consisting of seven plutonium capsules.

The device is believed to have a life of more than 100 years and was suspected to be buried under the snow on the mountain.

‘Device not behind Uttarakhand disaster’

Now, with concerns raised that the device could have triggered the Nanda Devi glacier to burst causing flash floods in the area, the leader of the 1965 expedition has sought to allay fears.

Captain MS Kohli (retired) has said that the equipment, including the nuclear device, is "very unlikely to emanate heat or blow up" on its own.

Capt Kohli said there was no way the lost device could have activated on its own, even if the special container carrying the nuclear fuel had got damaged.

Capt Kohli, who had served in the Indian Navy, said the device may be trapped inside the glacier and must have been lying in a dormant state.

As to why the device cannot get activated on its own, the Navy veteran said all the components in the device have to work together to activate the device.

He, however, acknowledged that the device could cause nuclear contamination of the Ganga river and its tributaries. That's the only threat posed, he asserted.

general High transmission of Covid-19 in states cause for concern, next three weeks crucial for Kerala
THIRUVANANTHAPURAM: The recent surge in Kerala’s Covid cases is a cause for worry. The health

politics CPM-BJP brawl in Malayinkeezh, many including pregnant lady beaten
THIRUVANANTHAPURAM: A fight broke out between the CPM and the BJP activists at Perukavu in

general Polling official skips duty after switching off phone, to be produced in court today
ALAPPUZHA: The Edathua police took into custody a polling official from his house for not

general 171 votes cast in Assam booth that has 90 voters
GUWAHATI: A total of 171 votes were cast in a booth in Assam's Dima Hasao