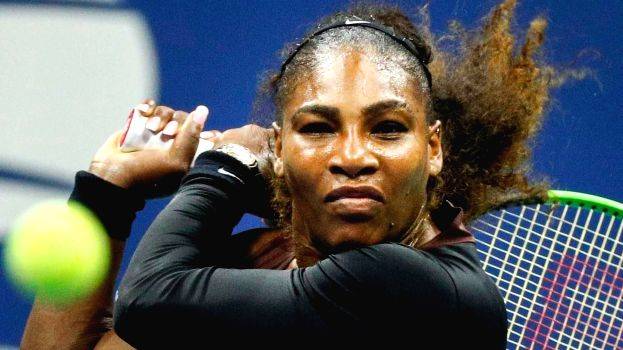 NEW YORK: World No. 26 Serena Williams on Thursday (local time) sealed her spot in the final of the ongoing US Open women's singles by handing Latvia's World No. 18 Anastasija Sevastova a 6-3, 6-0 defeat.
The win keeps afloat Serena's hopes of winning a first grand slam since becoming a mother, while she is also on the threshold of breaking a host of records.
She already has the highest number of Grand Slam singles titles (23) to her name in the Open Era, but the win in the semi-final gives her a chance to equal Australian legend Margaret Court's haul of 24 Grand Slam titles.
A win in the final will also register her as the holder of the highest number of US Open singles titles. Serena is currently tied with compatriot Christine Evert on 6.
The first game of the first set, however, indicated that Sevastova will deny Serena such opportunities as the Latvian broke the American's serve and registered the first game in her name.
Williams eventually established her superiority on Sevastova, breaking her serves to make it 2-2, and 4-2 before sealing the set at 6-3.
The former World No. 1 was relentless in the second set and did not concede a single game, breaking Sevastova's service thrice to register an emphatic 6-0 win and seal her final spot.
Serena will play the winner of the other semi-final clash between Madison Keys (USA) and Naomi Osaka (Japan) on Sunday in her 36th Grand Slam final.
In men's singles, World No. 1 Rafael Nadal (Spain) will face Juan Martin del Potro (Argentina), while Novak Djokovic (Serbia) will play Kei Nishikori (Japan) in the semi-final clashes on Saturday.

general Australian Open: History beckons as Serena shoots for Slam history
MELBOURNE: Serena Williams is back in Melbourne as hot favourite to repeat her 2017 Australian