NEW DELHI: Actors Joju George and Keerthy Suresh did not join hands with filmmakers boycotting national awards expressing solidarity with those protesting against the CAA. Joju George received the award (special mention) for his brilliant performance in ‘Joseph’ from vice president Venkaiah Naidu. Keerthy got the award for her performance in ‘Mahanadi’. The awards were presented to them at a function held at the Vigyan Bhawan. Union Minister Prakash Javadekar were also present at the function. Actors Ayushmann Khurrana and Vicky Kaushal shared the awards. 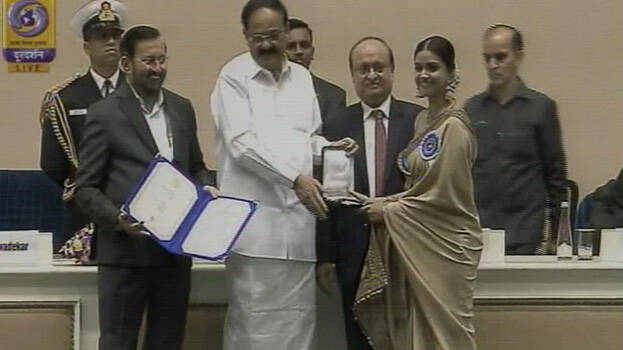 Only Joju and Keerthy were present from Kerala. Crew and actors of ‘Sudani from Nigeria’ boycotted the function in protest against CAA and National Register of Citizens (NRC). Savithri Sreedharan who portrayed a main role in Sudani boycotted the award.

general Kerala has not wasted a single drop; more than a crore received first dose of Covid vaccine
THIRUVANANTHAPURAM: Health Minister Veena George said the first dose of vaccine has been given to

crime Dharmarajan is not just a BJP activist, police receive vital information, contacted seven leaders after hawala heist
THRISSUR: Dharmarajan, the complainant in the Kodakara hawala heist case is an accused in spirit

politics Candidates had to face polls alone, many including E Sreedharan did not get any support; report received by PMO is as follows...
NEW DELHI: Prime Minister Narendra Modi has expressed dissatisfaction with the problems in the state

'About half of the population is at risk, presence of delta variant'; Health Minister urges people to be extra vigilant to prevent third wave

'It is not right to consider mortality rate as a sign of success in preventing an epidemic'; fight against Covid not a competition, says Sreejith Panickar

'That led to conflict': EP Jayarajan comes up with explanation in Assembly ruckus case

‘Jaleel had to leave in shame without resigning’; if Sivankutty resigns after being punished, face of our govt will turn uglier, says K Muraleedharan
TRENDING IN KERALA

All shops in the state to be opened, weekend lockdown to come to an end? Decision on Tuesday