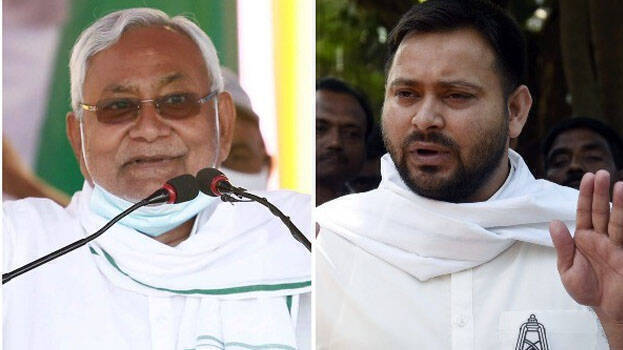 PATNA: Counting of votes for the 243 assembly seats in Bihar began at 8 am on Tuesday with initial trends suggesting a neck-and-neck contest between the two main alliances—the incumbent Nitish Kumar-led Janata Dal-United (JDU) and Bharatiya Janata Party (BJP) against Tejashwi Yadav's Rashtriya Janata Dal-led Mahagathbandhan of 5 parties. The polls, first amid the COVID-19 pandemic, will decide the fate of the incumbent Nitish for the 4th term. The three-phased elections ended on November 7. The anti-incumbency sentiment and the Nitish government’s handling of COVID-19 are factors that could play a major role this time.

Stay tuned for all the latest updates and election results trends from the Bihar. The results will decide if the voters have decided to hand over the state’s baton to the Grand alliance (Mahagathbandhan) led by its CM candidate Tejashwi Yadav, which constitutes the RJD, the Congress and Left parties.

Most exit polls have given the RJD-Congress-Left alliance a clear edge over the JD(U)-BJP coalition and has predicted that the ruling government was on its way out. While one poll forecast that the RJD-led Opposition alliance could get a two-thirds majority, another said it would cross the halfway mark comfortably. According to pollsters, Chirag Paswan’s Lok Janshakti Party, would end up with single-digit seats.

The voter turnout in the first, second and third phases of voting being held on October 28, November 3 and November 7 respectively, were recorded at 54 per cent, 55.7 per cent and 56.02 per cent respectively.

general Govt employees given Covid related work at areas near their homes; nobody could escape, strict guidelines issued
THIRUVANANTHAPURAM: The government has started preparing a list of government employees who have been staying

general RTPCR mandatory for people coming from other states, meat shops to function till 10 pm today
THIRUVANANTHAPURAM: Lockdown guidelines have been revised in the state. The government has also mandated to

'Agencies like KIIFB can become a hotbed of corruption'; Tamil Nadu Finance Minister says masala bonds are not attractive

'Coronavirus a living organism, has right to exist': Former CM's shocker on pandemic

'Nothing can ever compensate for the loss of a mother and wife'; Israel says it will take care of Soumya's family

"Should we cry or laugh?": Akhilesh Yadav on cow dung as Covid 'cure'

216 cr vaccine doses to be available in 5 months between Aug-Dec, enough to cover all: Centre