Ayodhya case: Let there be sense of reality 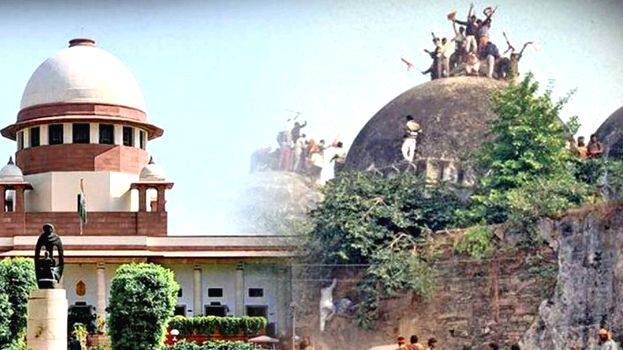 The Supreme Court on Friday ordered mediation to settle the Ram Janmabhoomi-Babri Masjid dispute by a three-member panel including spiritual guru Sri Sri Ravi Shankar, Justice (Retd) FM Kalifulla and senior advocate Sriram Panchu. The panel has been given eight weeks’ time by the apex court to arrive at a conclusion. It has to give a status report at the end of four weeks. The three members have been allowed to get more people on board if they want or get any legal help.
The above decision of the Supreme Court on Ayodhya case, an unhealed wound on the body of the nation, is very appropriate in face of the current situation.
When all the stakeholders in the case have their own stands and vested interests, the decision taken by a third party has its own value and status.
There are also people who argue that the court itself should have heard the case instead of going for a mediation.
Two years ago, the court had suggested that the two sides explore the possibility of resolving the matter through negotiation. The court even said it was ready to mediate if they agreed. But negotiations did not take off as all sides involved said they wanted the court to take a call.

And now, it appears to be the last effort of the Supreme Court to resolve the long-drawn dispute.
The panel will meet at Faizabad where Ayodhya is located. A strong restriction has also been placed on media who go to report from this place
The order, appointing the panel, was issued by five-member constitutional bench headed by Chief Justice Ranjan Gangoi.
It is not possible to overlook the role Ayodhya issue had in polarizing the country communally. More than three decades on, the case position stands where it all started and this manifests the hypocrisy and futility of political leaderships in this case.
It is essential for the broader interest of the nation to resolve the issue, setting aside selfish motives and understanding the fact that Ayoddhya issue is not a mere land dispute.
A lot of blood has been shed in the name of Ayodhya. The stakeholders should cooperate with mediation efforts and try maximum to resolve the issue, without sacrificing innocent people in the name of Ayodhya.
They as well as political parties that support them should have the realization that what is more important than election gains is the unity of people and their peaceful life.
They should also show their broadmindedness to accept the decision emerging through mediation talks.
Even World Wars have ended through compromise talks. Though a sensitive issue, this is possible in the case of Ayodhya also.
Commoners in Ayodhya and nearby areas are people who wants peace. The majority of people in the country are like that. The formula. The formula. The formula forwarded by the mediation committee however needs the acceptance of the court.
All parties are liable to obey the court’s decision once it accepts that decision. Let us pray that the efforts of the mediation panel don’t fail.
Now what the arguing parties in Ayodhya case need is a sense of reality.

general Petrol price hike a big blow to people
In Malayalam, there is an old saying that plantain tree is cut when the house

general Scarcity of water, fire outbreaks, epidemics….Be on your guard this summer season!
Kerala is now entering the state of drought, though it had witnessed two massive floods.

general 'I want my Masjid back, our fight was not for a piece of land', says Owaisi
HYDERABAD: AIMIM chief Asaduddin Owaisi on Friday said that he will continue to oppose anything

general Centre to set up Ayodhya temple trust soon, Modi to preside over meeting within one week
NEW DELHI: Latest report suggests that the Centre will soon set up a trust to

general We don't need five-acre land as donation, not satisfied with SC verdict, says Owaisi
HYDERABAD: AIMIM president and Member of Parliament Asaduddin Owaisi on Saturday said that he was

general Ayodhya verdict: Cong says it is in favour of Ram temple construction
NEW DELHI: The Congress on Saturday said it respects the Supreme Court verdict in the

Agricultural University warns Kerala to be ready for locust attack

Another COVID death in Kerala, native of Thiruvalla dies in Kottayam

Booking resumes in ‘Bev Q’, token for one lakh people in 10 minutes