THIRUVANANTHAPURAM: Five people were caught by the police for possessing hashish oil worth Rs 13 crores in the international market. This was seized from a car near Akkulam Kendriya Vidyalayam. Currency amounting to Rs 8.4 crores and the Innova car used were also seized. Hashish oil was kept in the door panel of the Innova car. Andhra native Ram Babu, Thiruvananthapuram natives Shafeeq, Sajan, and Idukki natives Anil, Babu were caught by the police. Excise Commissioner Rishiraj Singh said that the culprits were caught on the basis of a secret message.

The culprits aimed to smuggle hashish oil to Idukki from Andhra Pradesh via Tamil Nadu. They called for a car from Thiruvananthapuram as they jeep they traveled met with engine failure. In the recorded statement the culprits said that the drug was to be handed over to a mediator in the town.

In the past nine months, the Excise Circle seized hashish oil worth Rs 45 crores from Thiruvananthapuram alone. Talking about the bigger picture, drug products worth Rs 1000 crores were seized from different parts of Kerala. This further proves that drug inflow is high in the state. The culprits in the Karamana murder case were found to be drug addicts.

general Excise dept orders to freeze sale of Jawan rum
THIRUVANANTHAPURAM: The Kerala Excise Department has ordered a freeze on the sales of Jawan rum 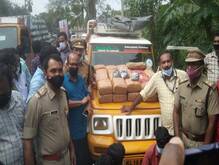 general Will govt accept recommendation of Excise department? Decision on re-opening of bars today
THIRUVANANTHAPURAM: A decision on reopening of bar and beer-wine parlours may be taken today (Thursday).

general Liquor to be supplied as per doctor's prescription; Kerala govt releases order
THIRUVANANTHAPURAM: The state government on Monday released an order and set of guidelines to make

general Drug sales focusing on other state students flourishing in the state, Excise to form 'Secret groups'
KOCHI: The excise department is planning to curb the sale of chemical drugs among students

general Will a thing buried underground get spoiled in rain? Basheer's panic became boon for excise
Just like how some fishes in flood water in hope of hooking big fish, the

'Can BJP pay money? Is there anyone named BJP?': Surendran says there are over 300 cases pending against him

'I would like to apologise if you felt let down by me...I removed my like'; Parvathy Thiruvothu issues apology
TRENDING IN KERALA

'Kanam trying to evade the topic as he has something to hide'; only a tip of the iceberg has come out, says V Muraleedharan

'Kerasree' developed in Pilicode is the star attraction in Secretariat