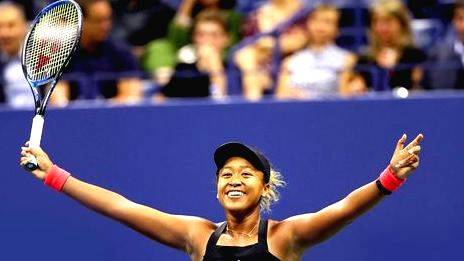 Williams had a meltdown late in the second set after being assessed for multiple violations. The 23-time Grand Slam champion was given a warning for coaching after chair umpire Carlos Ramos spotted Coach Patrick Mouratoglou communicating with Williams. The tennis superstar then approached Ramos to deny being coached or cheating.

"I'm telling you right now, I don't cheat to win. I'd rather lose," Williams told Ramos.

Williams proceeded to win the next point to tie Osaka 1-1 in the set. Williams had consecutive double faults later in the set and smashed her racquet on the court. Ramos gave Williams a code violation warning for the outburst, which resulted in a point penalty due to her previous violation. She started the next game down 15-0. Williams again approached Ramos and demanded an apology. Osaka went on to take a 4-3 advantage in the set after Williams' rant.

But Serena wasn't finished with Ramos. She walked toward his chair once again when she was switching sides with Osaka.

"How dare you insinuate that I was cheating? You stole a point from me. You're a thief too."

Osaka was given a service game after that exchange, giving her a 5-3 edge. Williams fought back for another point but was in tears following her conversation with Ramos.

Osaka closed out the match with a service winner.

Williams refused to shake Ramos' hand at the conclusion of the match. She embraced Osaka after taking the loss.

Williams began the final by taking a 1-0 advantage, before dropping five consecutive points to Osaka in the first set. She also took a 1-0 lead in the first set, and eventually pushed that lead to 3-1, before Osaka stormed back to win the match.

Osaka had six aces compared to Williams' three aces in the final. Williams also had six double faults, while Osaka had just one.

The U.S. Open champion stood in tears on the stage during the trophy presentation. Williams attempted to comfort Osaka before addressing the booing crowd.

"I just want to tell you guys, she's played well and this is her first Grand Slam," Williams said. "I know you guys were here rooting and I was rooting too but let's make this the best moment we can and we'll get through it. Let's give everyone the credit where credit is due."

Osaka rejected a question regarding Williams before holding up her trophy.

"I know that everyone was cheering for her and I'm sorry it had to end like this," Osaka said. "I just want to say thank you for watching the match."

No. 3 Juan Martin del Potro battles No. 6 Novak Djokovic in the men's final at 4 p.m. on Sunday in New York.